The first week of November was the most difficult one of past months: massive rescues in the central Mediterranean, with a total of 2610 rescued and more than 40 dead refugees. Among the dead were 26 Nigerian girls, 14 to 18 years old, whose bodies were found during a rescue by a Spanish military ship. Our team rescued and transferred 588 people to Italy, including four dead bodies. We rescued people from 30 different countries across Africa and Asia like Nepal, Yemen, Equatorial Guinea, Egypt, Sudan, Libya, Sierra Leone, Benin and more. 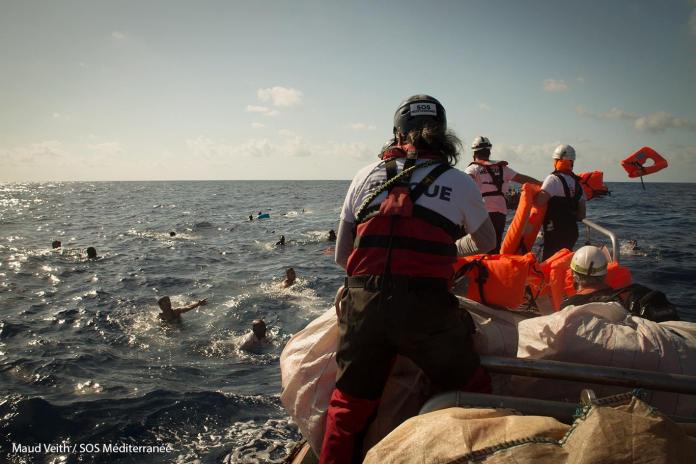 The most challenging rescue took place on Wednesday 1 November, 35 nautical miles off the Libyan coast. A rubber boat carrying 120 people was spotted heading steadily towards our position. Everything seemed fine, we had one of our RIBs [rigid inflatable boats] on the water already and as we were about to launch our second RIB, a voice was heard: “People in the water!” I take a look, and I see the boat has cracked and dozens of people are struggling to stay afloat. My heart skips a beat at the thought that there are families with babies, no one is wearing a lifejacket, and very few know how to swim.

In the time it takes us to prepare the crane and launch our second RIB, our first RIB has already returned from the scene, with a lot of commotion on board. I could tell something was wrong. “Oh my god, they are doing CPR,” I thought.

Radio confirms: “We have a person with cardiac arrest.” Instantly the deck of the Aquarius is cleared, the person is put on a stretcher, and CPR with chest compressions and artificial respiration continues on the ship.

We jump into the second RIB and rush to the scene. The sight is unbelievable. The rubber boat is broken in two and most of the people are packed on the front part that is still afloat. Dozens of people are in the water, screaming and struggling to survive. We throw lifejackets to them and try to bring closer whatever floating devices we have. 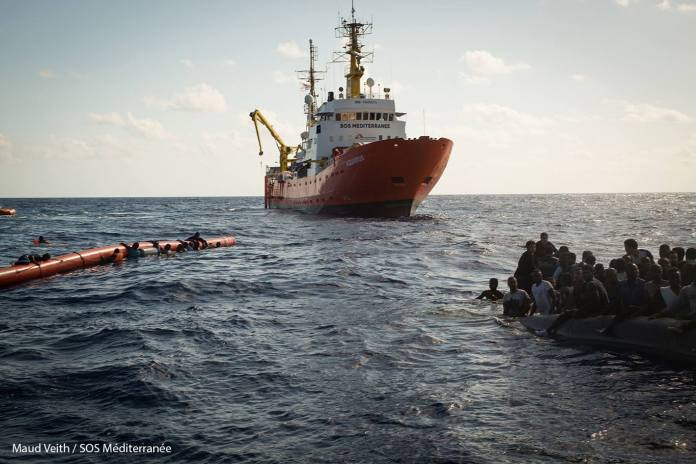 Despite the chaos, the reaction of the people was astonishing. A 15-year-old kid was standing alone on the flooded stern with water up to his neck, yet he was not swimming away to save himself. He stood there to hold the ropes of the boat up, so that less water would get in, to save the others.

I saw another person who, despite being on the safe spot of the dingy, jumped into the water, swam 50 meters away, grabbed three lifejackets, and gave them to those who didn’t have one.

People who were safe on our boat were taking off their lifejackets and throwing them to others who were drowning.

Even more than this, one of them took off his own lifejacket and jumped into the sea to tow another struggling person to our RIB.

There was nothing like “every man for himself” here. Even 5-year-old kids were helping us any way they could. I don’t know how to explain it. Maybe the horrifying conditions in Libya have developed a strong sense of community among the people. Drowning is another version of the everyday fight against death in Libya, and maybe not the worst one. As Chabi from Gambia told me: “We prefer to die in the sea than return to Libya.”

A young guy from Sudan without a lifejacket was struggling to keep his unconscious brother afloat. When we reached him he was supine and had no pulse. We started CPR on the RIB, continued on the ship’s deck, and miraculously after twenty minutes he came back to life! Immediately after this, a military helicopter arrived to transfer him to the hospital of Lampedusa.

Unfortunately, not everybody shared the same luck that day. One person sank in front of our eyes and disappeared in the water. Witnesses from our ship said they saw two more people drowning and sinking. From gathering testimonies from rescued people, we understand that there were an unknown number of missing people. One girl from Nigeria was looking for her two brothers on board until we arrived in Italy.

On the deck after the rescue, I met the 15-year-old kid who had been heroically holding the boat to prevent it from flooding more. His name was Mohamed from Sudan, and he was traveling with his uncle. He explained to me that their boat punctured on the way, and they had been covering the holes with duct tape. The holes became bigger, and finally the sponson ruptured, about five minutes before we arrived. Had we arrived thirty minutes later, all of them would be dead. 120 people.

Soon after, other rescued people joined the conversation and started talking to me about Libya:

“In Libya they don’t distinguish between minors, women, or children, they torture us all. It’s completely lawless, every gang acts the way it wants. They capture us in the middle of the street like wild animals and they hold us in private prisons. Every gang has its own prison. Every day you see people die in these centers, every day. From torture, diseases, executions. If you don’t give them the money they demand , they cut off your fingers, they electrocute you, they flog you until you faint. Their only aim is to take ransom from our families back home. To hasten payment, every week they gather us in the yard, put us in a line and randomly execute one of us. I have seen two people murdered this way. The third week I managed to escape by pushing a brick out of the wall in the toilet, making a hole, and getting out.”

Two other 15-year-old kids from Guinea (Conakry) tell me about their experiences in Libya:

“They were beating us every day. They don’t show mercy to anybody. We were stabbed several times, we still have the scars on our arms. The problem is not the beating, it’s the killing. Everyday they kill people for absolutely no reason. One man, they splashed gas all over him and burned him alive. Some nights we hear cries from girls who are being raped by the guards. Sometimes they even rape the woman in front of her husband as a method of torture.”

“The centers are the worst places you can imagine. We can never have a shower unless they want to torture us using electricity. The food is just one big plate of pasta for 50 people. The guard just throws it in the room and if you are lucky enough you can grab a handful to eat. Shooting in Libya is as constant as we hear the engine of the ship now. It’s constantly present, you don’t even pay attention to it any more. Don’t ask me how many immigrants I have seen getting shot, they are countless. Guards in Libya are like kids, if they want to be entertained by killing someone, they will do it without any hesitation. Especially at night when they are on drugs, they are extremely dangerous and unpredictable.”

Akim bursts into tears when he shows me his mouth, and explains to me that they forced him to call his mother to ask for ransom and they pulled his tooth out so his mother could hear him yelling.

The European Union is funding these torturers and criminals to stop the migrant boats from departing and return all the refugees to the hell of the Libyan concentration camps.

Libyan militias have been granted more than 200 million euros, plus coastguard vessels, training and equipment to serve as the EU’s anti-immigration unit. This is perhaps the biggest political scandal happening now, and almost no one talks about it.

The EU is funding and backing crimes against humanity. 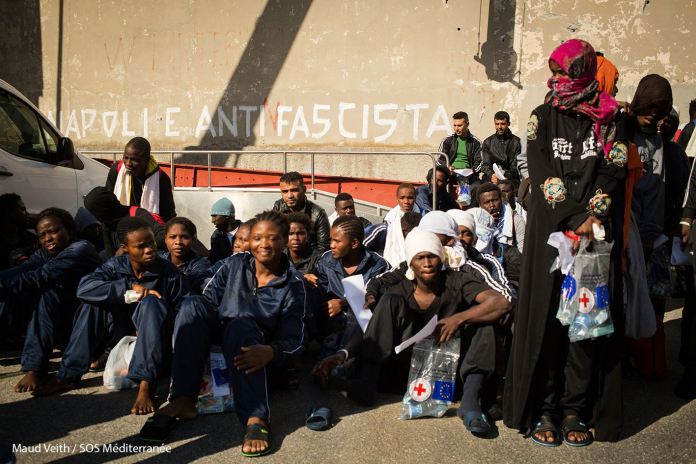 On solid ground again in Calabria

One thought on “Heroism and Horror in the Mediterranean”