AntiNote: Our friends at the Russian Reader have been translating and publishing all manner of material detailing the Russian repressive apparatus’s targeting of young antifascist activists this year, as well as community solidarity responses to it. We reprint this most recent collection of testimony, photos, and links as a useful place to get caught up in case you’ve been sleeping on it.

“Stop torture at the FSB”

“They’re not terrorists. The terrorists are at the FSB, and they torture people.” 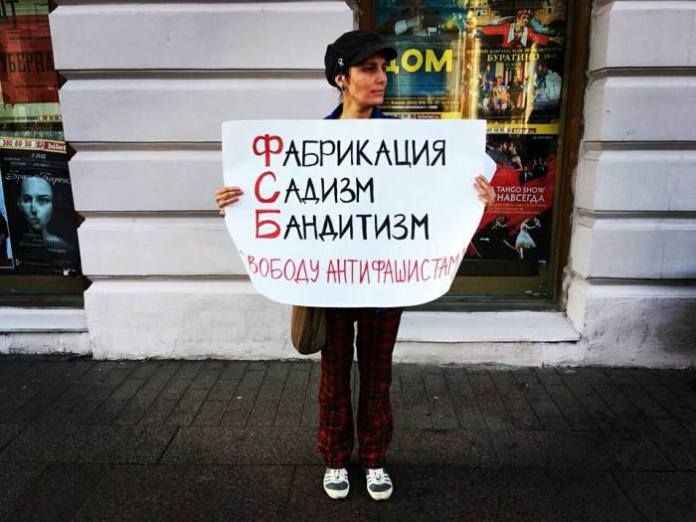 “Antifascists are tortured in the country that defeated fascism. Rupression.com.”

“Give me back my 1937. Antifascists are tortured in the country that defeated fascism. So who won? Rupression.com”

All photos by Jenya Kulakova

Nikolai Boyarshinov, father of Yuli Boyarshkinov, a suspect in The Network Case, carried out a solo picket on Nevsky Prospect this evening. He held up a placard that read, “My father, Nikolai S. Boyarshinov, fought against the fascists. My son, Yuli N. Boyarshinov, an antifascist, has been arrested by the FSB. Did we defeat the fascists? Or have we been infected by fascism?”

Nikolai Boyarshinov was joined by ten or so activists in a series of solo pickets. They also stood on Nevsky, holding up placards with slogans that read, “Antifascists are tortured in the country that defeated fascism,” “Stop torture at the FSB,” and “Free the antifascists.” They leafleted passersby. They also collected signatures on a group letter to the warden of Remand Prison No. 6 in Gorelovo, demanding Yuli Boyarshinov be housed in humane conditions.

The passersby included people who asked how to help, who thanked and shook the hands of the picketers, and who voiced their support to Nikolai Boyarshinov. There were also people who said it was not possible that antifascists were tortured in Russia, people who heatedly argued with the picketers.

Police offers warned the protesters a distance of fifty meters must be maintained between solo pickets. They checked the papers of the picketers. Standing next to Nikolai Boyarshinov, they waited an hour and a half for him to roll up his placard and leave Nevsky Prospect.

Thanks to everyone who came out today to voice their solidarity. Write letters to the arrested antifascists, support their parents, and strengthen the networks of solidarity.

Translated by the Russian Reader

If you have not been following the Penza-Petersburg “terrorism” case and other cases involving frame-ups, torture, and violent intimidation by the Russian Federal Security Service (FSB) and other parts of the Russian police state, read and repost the recent articles the Russian Reader has translated and published on these subjects.