AntiNote: The following article appeared on the outstanding People and Nature blog earlier this week, with link citations which we have not reproduced. Reprinted with permission.

Activists imprisoned in Azerbaijan, the house that BP built 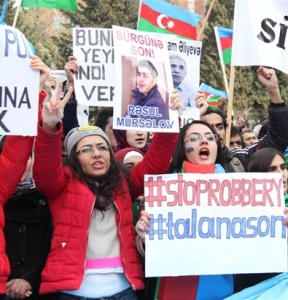 A protest against Azerbaijan’s crackdown on political dissent will be staged in London this Friday, 12 June, as the first European Games open in Baku.

At least 33 human rights defenders, youth movement activists, bloggers, journalists and others have been jailed in the last year in Azerbaijan, where the UK-based oil group BP is the largest foreign investor.

Campaign groups and media have been shut down, and dissidents forced to leave the country, just as economic problems have brought large numbers of Azeris out to protest.

There has been a “major escalation of government repression, pressure, and intimidation directed at NGOs, civil society activists, journalists and human rights defenders,” a resolution of the European Parliament said in September last year. Some lowlights: END_OF_DOCUMENT_TOKEN_TO_BE_REPLACED

This work is licensed under a Creative Commons Attribution-NonCommercial 4.0 International License.