Transcribed from the 21 February 2015 episode of This is Hell! Radio and printed with permission. Edited for space and readability. Although we have cut this transcript down significantly less than we generally do, we strongly encourage you to listen to the audio, to fully appreciate the emotional intensity of the conversation.

“The people of Kobanê were about to face a massacre, and the president of Turkey just wore his sunglasses and made macho statements. He exploited the desperate situation in Kobanê.”

Chuck Mertz: We’ve been talking about all the new challenges to the traditional seats of power around the world, from the Islamic State and how it challenges our notion of the modern state, to SYRIZA and how they’re standing up to the Eurozone’s austerity policies, to Spain’s Podemos, who have created a whole new form of democracy, even to the extra-statecraft of free trade zones that exist outside nations’ and a people’s laws.

But there’s something completely unique happening in Western Kurdistan, a new kind of democracy, and it’s led by women, and they are fighting and beating the Islamic State. Here to tell us about Rojava, Kurdish refugee Dilar Dirik is an activist of the Kurdish women’s movement, and a Ph.D. candidate in the sociology department of the University of Cambridge, where her research focuses on Kurdistan, the Kurdish Women’s Movement, and the PYD (Democratic Union Party) which has existed in the Rojava territories since 2004.

END_OF_DOCUMENT_TOKEN_TO_BE_REPLACED

All parties to the collaboration which brought this article to English-language readers were conscious and wary of the anti-imperialist/anti-anti-imperialist sideshow currently preoccupying parts of the Western Left, and we expected to hear from these quarters. We were not disappointed. Some of the article’s critics, who complained that Babacan and Çakır do not make concrete proposals, can be dismissed immediately for reasons apparent to anyone that reads the article in its entirety. In more urgent need of response are allegations of propagandizing—that the social structures in Rojava are described too glowingly and that the righteousness of the PYD and PKK is not sufficiently interrogated.

Fair enough. The AWC’s initial reaction to these jabs (and the authors surely have their own) is that in situations as complex, fluid, and violent as either the Syrian civil war or the Kurdish struggle for self-determination—which happen to overlap here, wonderful—accusations of propagandizing can be leveled at any of the information flowing from any source with an obvious stake in the conflict. More specifically, the equally propagandistic claims that the PYD is guilty of repressing Rojava’s population or that the Kurdish Movement is ‘on Assad’s side,’ have not been substantiated to the extent that Babacan and Çakır’s contrary claims have been, and certainly not to our satisfaction at the AWC.

(To deflate this entire argument, though, we suggest turning our critical attention to this week’s article by Syrian revolutionary-in-exile Yassin al-Haj Saleh, and thus on ourselves.)

Finally, in the month since this article’s publication in English the situation in Kobanê has continued to evolve. We have updated the language in a few places to reflect this, though a full appreciation of the ultimate liberation of the city, confirmed only last week, is necessarily absent. Babacan and Çakır’s calls—especially for the opening of an aid corridor through Turkey—are, however, no less relevant as the city rebuilds and its inhabitants begin to return.

We have also not reproduced Jacobin’s link citations or, regrettably, their accompanying photo essay. Both can be found and enjoyed in the original.

The False Friends of Kobanê

by Errol Babacan and Murat Çakır

The significance of the struggle in Kobanê cannot be overstated. But real international solidarity won’t come in the form of military intervention. END_OF_DOCUMENT_TOKEN_TO_BE_REPLACED

An Interview with Revolutionary Anarchist Action on Kobanê

AntiNote: This interview with members of Devrimci Anarşist Faaliyet (Revolutionary Anarchist Action, or DAF) first appeared in Turkish in Meydan, a “monthly anarchist gazette,” on 22 October 2014. The English translation appeared on the DAF’s own site five days later. The DAF is a relatively young political organization in Turkey whose name speaks for itself—they announced their active participation in the Kobanê Resistance several months ago.

In the coming weeks we hope to provide a fuller profile of this group, their work, and where they fit into the complex political landscape of Rojava—as well as the Kurdish struggle and the Syrian revolution more broadly. For the moment it is sufficient to emphasize that many of the DAF’s allegations about Turkey’s disposition towards ISIS were further confirmed last weekend with widespread reports of an ISIS incursion into Kobanê directly from the Turkish side. 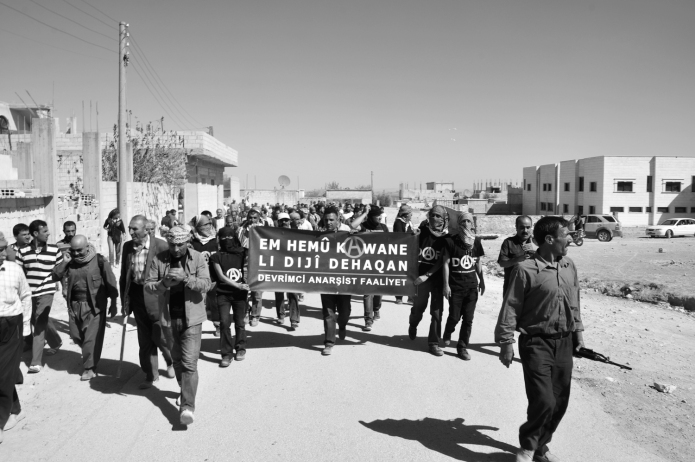 END_OF_DOCUMENT_TOKEN_TO_BE_REPLACED

The Travel Account of a Karakök Autonome Activist (Part 1)

AntiNote: Since the battle for Kobanê started making headlines last month, and before that if we may say so, the AWC has been conferring with our invaluable comrades close to both the Syrian revolution and the Rojava struggle and trying to determine how best to present these topics here.

Complicating matters, of course, is that news out of Kobanê in particular changes minute to minute—first, the fall of the city was inevitable, then it turned into a lasting siege; then all at once ISIS fighters were in retreat and the battle “over.” But the siege continues, and continues to confound: the roles and statements of the Turkish, American, and many other states shift constantly; people continue to scrape across the Turkish-Syrian border near Kobanê, in both directions; the situation is exquisitely fluid.
END_OF_DOCUMENT_TOKEN_TO_BE_REPLACED